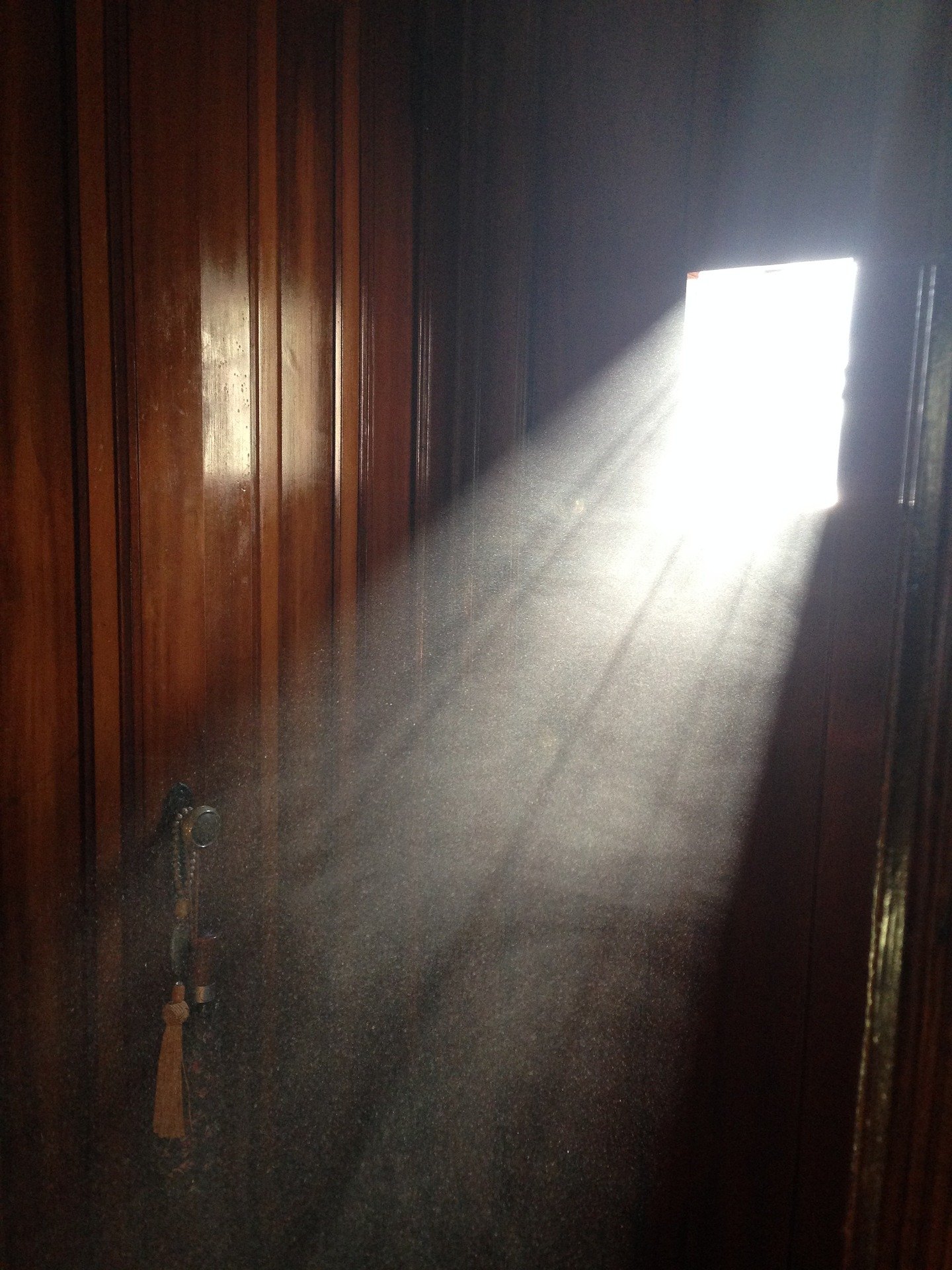 The atmosphere around us is filled with tiny microscopic particles known to us as aerosols. While reading this first sentence, you are likely to breath in anything from 10,000 to 100,000 of these tiny particles!

AerosolSuspension in a gaseous medium of solid particles, liquid pa... particles are any solid or liquid (or a combination of both) suspended (or floating) in the atmosphere. They exist in a multitude of forms and and sizes, but generally go unnoticed in everyday life.

Presence in the atmosphere

Airborne solid and liquid particles (e.g. in the form of dust, smoke, mist and fog) have always been a component of the atmosphere. Together they are referred to as aerosolSuspension in a gaseous medium of solid particles, liquid pa.... Natural sources that contribute to the release of primary particles into the air include oceans, deserts, plants, volcanic eruptions, erosion and fire.

In addition, atmospheric photochemistry involving biogenic volatile organic compounds (known as precursor gases, such as isoprene and monoterpenes) leads to the generation of secondary particles.

Since the industrial revolution, in particular, primary or secondary anthropogenic particles have been making up a growing proportion of the atmospheric particleSmall discrete mass of solid or liquid matter. spectrum.

According to the World Health Organisation (WHO), particular sources of high concentrations of anthropogenic airborne particles include combustion processes and photochemical reactions from anthropogenic precursor gases.

Ambient aerosolSuspension in a gaseous medium of solid particles, liquid pa... is made up of various particleSmall discrete mass of solid or liquid matter. sizes, i.e. ultrafine, fine and coarse particles. The chemical composition can vary greatly, depending on the source and transport conditions. Elevated concentrations are measured in the vicinity of industrial facilities. Particles with a diameter less than 50 nm are essentially composed of low-volatility organic compounds.

Fine dust concentrations indoors can originate from continuous (e.g. ambient air, heating) and from intermittent (e.g. cooking, smoking, burning candles, printers) sources. As a result of these different source locations and dynamics, the size distribution and composition of indoor particles vary markedly. The processes mentioned below are of special importance. All processes together induce and determine the dynamics of the indoor particleSmall discrete mass of solid or liquid matter. spectrum.

What are the sources of fine dust?

The indoor sources of particulate matter are diverse. If the premises are in use, the indoor aerosolSuspension in a gaseous medium of solid particles, liquid pa... is often affected by indoor sources, which may be located either in the investigated room itself or in adjacent rooms.

Typical sources found in different types of premises and which should be taken into consideration are listed below.

a) The typical sources in living rooms include:

b) The typical sources in an office include:

c) The typical sources in kindergartens and schools include:

Indoor airborne particles cover a large size range from a few nanometres up to 100 μm. ParticleSmall discrete mass of solid or liquid matter. size is deeply influenced by origin, but also by chemical or physical reaction following generation. A non-exhaustive list of typical sources of indoor airborne particles with their typical size ranges is presented in the following figure.

How do PM get into the air?

What are the health effects of PM?

Epidemiological studies show that high concentrations of fine dust in the ambient air are associated with health consequences, such as damage to the cardiovascular system and the respiratory tract, and with increased morbidity and mortality. A summarising analysis of European time-series and panel studies on the effects of particles from the ambient air, carried out in 2004 for WHO, demonstrated

in all age groups and hospital admissions of elderly patients. Accordingly, limits have been developed for ambient air concentration of fine dust. Compared with the number of studies that describe the effect of ambient air aerosols on human health, so far there exist few studies dealing with indoor air.

The Directive 2008/50/EC envisages limits for the daily and annual means of PM10 in ambient air. For the PM2.5 fraction, the amendment of this Directive specifies an annual mean of 25 μg/m³ as a limit from 2015, and which from 2020 is to be lowered to 20 μg/m³. The PM10 limits remain unchanged in the 2008 revision of this Directive (24 h mean: 50 µg/m³, which may be exceeded 35 times per year; annual mean: 40 μg/m³). The limit set by the EU Air Quality Directive for PM10 represents, in terms of type, level and measurement strategy, a convention for limiting the health risks caused by fine dust in the ambient air.

In principle, the global interim and target values proposed by WHO in 2006 for fine dust in ambient air can also be used for indoor situations. However, this WHO proposal relates primarily to particles emitted by combustion sources; these are mostly particles belonging to the PM2.5 fraction.

How can PM be reduced?

There is no general solution to reduce PM in your house. Each house has different sources and sinks, dominating domestic air pollution. Is outdoor air pollution the main source, air filters on the windows or in the airco/ventilation system can deliver a reduction. If possible, quit reduce smoking, limit the use of burning candles, adding a good filter to the vacuum cleaner, change the kitchen stove from gas to induction, etc. When sources are determined during a measurement, a possible solution can be given.

How do we measure PM?

We deliver the solution

Do you like to get in touch with us or to request a quotation? – Just fill in the contact form!

Manage Cookie Consent
To provide the best experiences, we use technologies like cookies to store and/or access device information. Consenting to these technologies will allow us to process data such as browsing behaviour or unique IDs on this site. Not consenting or withdrawing consent, may adversely affect certain features and functions.
Manage options Manage services Manage vendors Read more about these purposes
View preferences
{title} {title} {title}